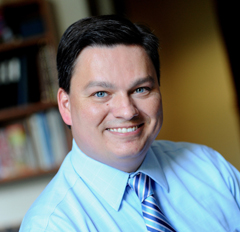 Scott grew up in the suburbs of Buffalo, NY, where his interests in science, particularly chemistry, were forged by a variety of experiences including an opportunity in high school to attend the United States National Study Camp for the International Chemistry Olympiad. Scott pursued his undergraduate studies at Williams College in Williamstown, MA where he graduated as valedictorian, and in 1999 began his graduate studies with Professor K. C. Nicolaou at The Scripps Research Institute in La Jolla, CA. During the next five years, Scott was fully funded by graduate fellowships from the National Science Foundation, Pfizer, and Bristol-Myers Squibb, and in addition to his benchwork he also co-authored the advanced text Classics in Total Synthesis II (Wiley-VCH). He was then an NIH postdoctoral fellow at Harvard University with Prof. E. J. Corey before starting his independent career at Columbia University in 2006. After being promoted to Associate Professor of Chemistry in June of 2011, Scott moved to Jupiter, FL campus of The Scripps Research Institute in September of 2013 as an Associate Professor of Chemistry, and was recruited by the University of Chicago as a Full Professor in September of 2015.

His research interests are devoted to the synthesis of complex natural products, particularly those of the terpene, polyphenol, and alkaloid classes, seeking to identify new strategies and tactics of broad significance. Particular emphasis has been placed on dimeric and higher-order natural products of these classes. In addition, Scott and his group have developed a unique group of halogenating reagents that are used in both academia and industry, with one sold by Sigma-Aldrich to create natural and designed compounds.

Overall, Scott has trained more than 70 scientists in his laboratory from the high school through postdoctoral levels, and has delivered more than 175 lectures to date worldwide. He is dedicated to chemical education in its broadest sense as denoted by a Cottrell Scholar Award from the Research Corporation for Science Advancement (2009). Scott is also helping to shape the face of undergraduate education worldwide as co-author (with T. W. G. Solomons and C. B. Fryhle) of the 11th and 12th editions of Organic Chemistry (Wiley). Scott has also edited a set of volumes on domino chemistry that was just published by Thieme, and finally, Scott has also co-authored, with P. J. Beuning and D. Z. Besson, a book on teaching and mentoring in science entitled Teach Better, Save Time, and Have More Fun.